Please register an objection to the diversion of this footpath 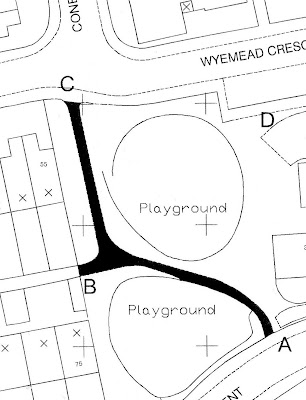 Last year the Council tried to close this public footpath off Wyemead Crescent E4 (shown above). This was pretty much business as usual for a Council which fairly regularly seeks to shut down public footpaths without ever bothering to find out how many people use them or with what frequency. Not only was the Council indifferent to those using this pathway, it had never even bothered to sign it as a public footpath

In the face of objections from local residents the Council backed down. Instead of putting its case before the Planning Inspectorate it abandoned its proposal. Presumably it felt it might well lose. Hence this announcement, tucked away in the small print of wfm,8 June, p. 12.

But, like the Terminator, the Council never gives up. It is now back with a new proposal to divert this footpath. The reasons for its zeal are not hard to seek. This particular site was once a children’s playground. The Council let it go to wrack and ruin. Instead of cherishing this green site and the public footpath which runs across it, the Council would prefer to forget about it and hand it over for development. This is happening on a much bigger scale with the controversial proposed development of Leyton County cricket ground. Interestingly a letter in this week’s Waltham Forest Guardian says ‘The rumour is that the Council has decided to build a large housing estate on Chestnut Fields’ – another, much larger green site. It’s a rumour which is entirely credible. All these developments of green sites form part of a wider pattern.

The Council gave planning permission for a development here on Wyemead Crescent in 2006, granting it to ‘The Christian Action (Enfield) Housing Association Limited’. Although there is no reason to believe this will happen in this case, it is worth bearing in mind that the last time the Council granted planning permission for a development and gave away public land to a housing association, the association subsequently decided not to build on the land and proceeded to put it up for sale. In a serious economic recession the viability of any new building development is open to scrutiny.

The Council did not consider the reality of the public footpath which runs across the site until 2008, when it suddenly proposed closing it. Now, three years after granting planning permission, and having given up on shutting the path down, it is proposing the diversion. Some Wyemead Crescent residents are understandably fed up with the Council’s inertia over this site, which they say is a focal point of anti-social behaviour. However, that is not a reason for being bounced into accepting the diversion. The Council should have considered the implications of the footpath before granting planning permission; having granted it, it was entirely the Council’s decision to delay matters.

The proposed diversion is as shown below. 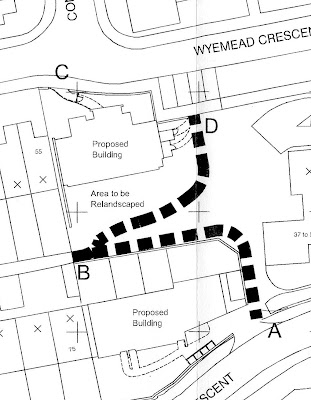 The photograph below shows the current route of a section of the path, as it currently runs in a straight line between the letters B and C on the plan above. As can be seen, this existing route links directly and conveniently with the footway on Coney Burrows in the distance (which leads directly on to Whitehall Road). 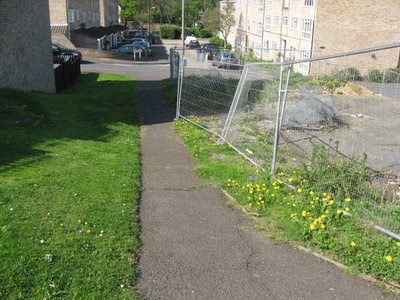 The problem with the proposed diversion is that it changes a direct public footpath across open land into a longer, less direct and much more unattractive route. Personal security is also plainly an issue, as anyone using the path will evidently in future be hidden from view for parts of the route. Anyone who uses this route as a short cut between Whitehall Road and Normanton Park will likely be deterred from doing so in future. The proposed diversionary route is longer and also does not emerge opposite Coney Burrows, as the existing path does (which is the obvious route for anyone using this path as a short cut).

If you live in the London Borough of Waltham Forest, please register an objection to ‘The Waltham Forest (Wyemead Crescent) (Public Path Diversion) Order 2009’. A simple statement to the effect that the proposed diversion is unacceptable because it replaces a direct and open public footpath with a longer and more unattractive route is sufficient. You need to include your name and address. You can email your objection to hazel.game@projectcentre.co.uk or send it in writing to Ms. Game at The Project Centre, Saffron Court, 14b Cross Street, London EC1N 8XA.

The full Diversion order is published on page 12 of wfm, 8 June.

In the face of unwithdrawn objections the Council has, I believe, two options. It can order a full public inquiry or it can invite objectors to accept the judgement of the Planning Inspectorate. This second option offers the swiftest and most acceptable resolution in a case of this sort. The Inspectorate sends an inspector to visit the site. The inspector considers the Council’s case for diverting the path, and the arguments of objectors for retaining the existing public footpath route. A judgement binding on all parties is then announced.

There is certainly nothing to be lost by registering an objection. If objections are upheld, then the Council will then be obliged to rethink its attitude to this green site. Returning it to its former status as a children’s play area might not be a bad idea.
Posted by freewheeler at 09:02