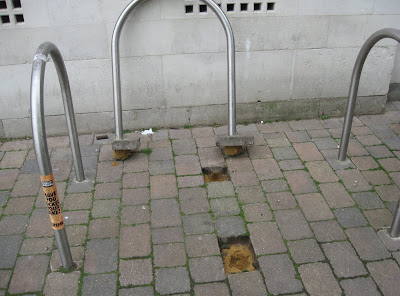 (Above) Bloody marvellous. The great Bike Day extravaganza in the Town Square has resulted in the loss of another cycle stand (that makes a grand total of nine which are now missing). Someone has wrenched this stand from its foundations. I would guess either someone turned up to the Bike celebrations on Sunday on an expensive bike and had it stolen, or someone couldn't unlock their bike and resorted to brute force.

I thought it would be interesting to take a look at the Town Square and nearby cycle stands after Sunday's council-run Bike Week extravaganza was over. This is what I found. All pics taken yesterday.

(Below) These dumped, rusting stall frames have been lying behind the cycle stands outside Walthamstow Library for years. Their presence inspires others to dump other crap. But when it comes to maintaining cycle facilities, even in a very prominent location, inertia and indifference are the order of the day. 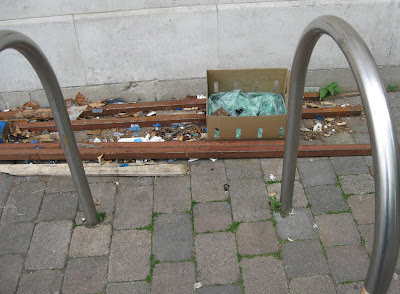 (Below) This abandoned bike frame in the Town Square has been here for many months. The bike stands by the children's playground. 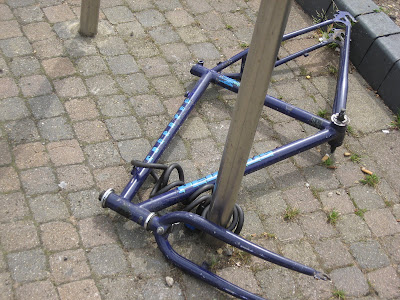 (Below) As you can see, the council's commitment to Bike Week has resulted in a dramatic improvement to the problem of cycle stand obstruction on Mission Grove E17, next to the High Street branch of Percy Ingles bakery. 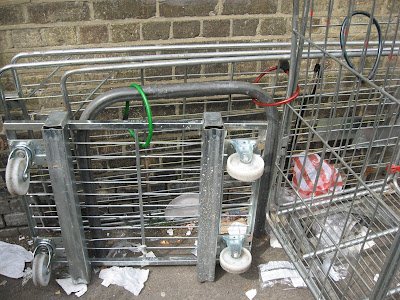 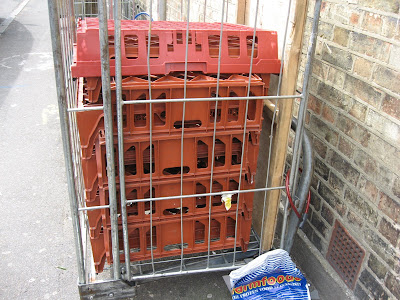 (Below) However, it is undeniable that things are getting greener in Waltham Forest. (Cycle stand just off the High Street, Pretoria Avenue E17) 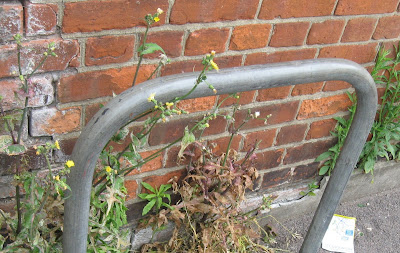 Posted by freewheeler at 09:29