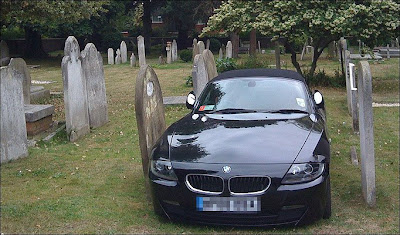 St Mary's Church in Wimbledon Village, south-west London had been charging £20 a day to park in its cemetery.

Speaking to BBC London 94.9FM, Melanie Allcock from Balham, who parked in the cemetery, said: "We were told: 'Go and reverse between these gravestones'."I thought: 'This is very odd'. But we did it and went to Wimbledon."

Fair enough. How else could one possibly travel from isolated Balham to a remote, faraway region like Wimbledon other than by car?

The Church of England has a marvellous record locally, as it does nationally.

Here’s an inspiring example of a church on Exmoor which is passionate about supplying vehicular access.

Posted by freewheeler at 09:01