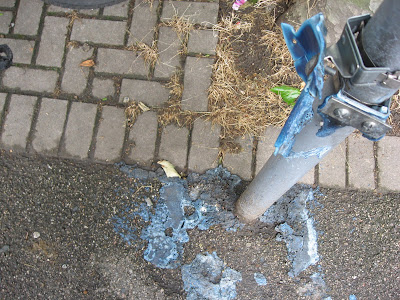 A popular local tradition which, scandalously, seems to have gone without any recognition by anthropologists, is setting light to plastic street furniture, i.e. litter bins and grit bins.

This magnificent example on Erskine Road E17 has resulted in the very effective conversion of this blue litter bin into an alien mass strangely reminiscent of extra-terrestial blob invaders in low budget 1950s science fiction movies.

Sadly the PCSOs were unable to apprehend any suspects as they were elsewhere, busy cracking down on suspicious Austrians attempting to photograph double-decker buses at Walthamstow bus station.

The good news is that Tate Modern is negotiating to buy this magnificent art work from the Council.
Posted by freewheeler at 07:37