Another London woman cyclist killed by a lorry driver 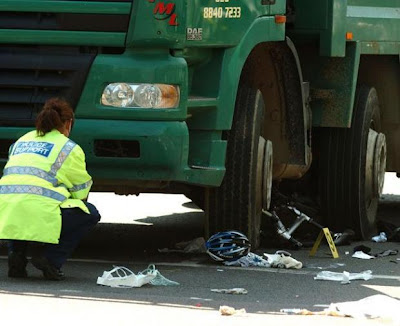 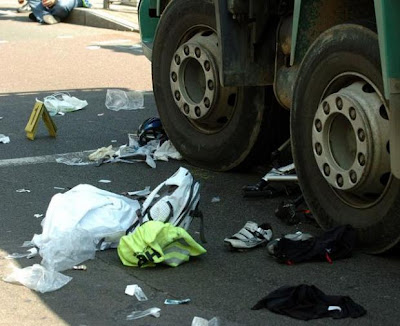 A WOMAN cyclist has been crushed to death by a lorry in front of hundreds of commuters on their way to work. These images show the scene after a woman, in her 30s, fell under the front wheel of the lorry as it turned left from Clapham Road into Harleyford Street, by Oval Tube station.

Witnesses said she became trapped between the lorry and railings at the height of morning rush hour, just after 8.30am yesterday. She was rushed to hospital but died a few hours later.

She is the sixth cyclist to die this year after being hit by a heavy goods vehicle - five of whom have been women. [Wrong. She’s the seventh. The killing of María Emma García Fernández earlier this month has gone entirely unrecorded in this country, except by this blog and two cycling threads.]

A Scotland Yard spokesman said the driver was arrested at the scene on suspicion of causing death by dangerous driving.

My immediate response is:

(i) Just look at those lethal railings in the photos. They may or may not have had a role to play in this latest fatality but nevertheless railings at every road junction in Greater London (spot the railings in the last pic in my lorry post below) need to be torn up AS A MATTER OF URGENCY. They are quite literally death traps for any cyclist caught between them and a heavy goods vehicle.

(ii) BBC London News has contemptuously ignored this fatality, just as it has done every other lorry/cycling fatality this year and in 2008. The cycling community should be bombarding the BBC with protests about the way it marginalizes road violence. Complain to the head of BBC News: helenboaden.complaints@bbc.co.uk

(iii) The police could play a major role in making our roads safer by cracking down on lawless drivers, lorries flouting the law (like the one in the Boris incident, with doors held together by a coat hangar) and enforcing Advanced Stop Lines. The Met is signally failing in its duty of care to vulnerable road users, and it’s about time London’s cycling community vented its dissatisfaction outside New Scotland Yard.

London Cycling Campaign has criticised Road Safety Minister Jim Fitzpatrick for failing to implement measures to protect vulnerable road users from lorries. In a letter to LCC this week, the minister confirmed he has no plans to speed up the fitting of Class VI safety mirrors, nor to ensure lorry driver training will make them more aware of cyclists and pedestrians.

The letter from the minister came days after another London cyclist was involved in a fatal collision with a heavy goods vehicle in Greenwich on 15 May 2009. LCC has long campaigned to speed up the fitting of Class VI safety mirrors to all HGVs. These mirrors give a view of the road directly in front of the driver’s cab, and are proven to reduce cyclist and pedestrian casualties.

Under the current programme, most UK lorries will not have these mirrors until 2014.

I don't know which office Jim Fitzpatrick hangs out in (it shouldn't be too hard to find out) but I think we need 500 cyclists to turn up outside it to send him a message. 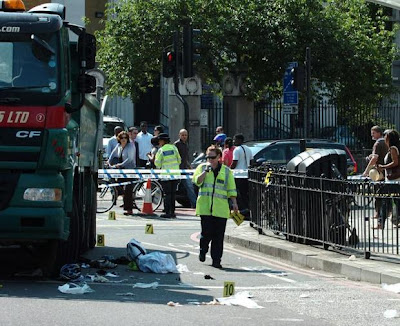 Posted by freewheeler at 22:14