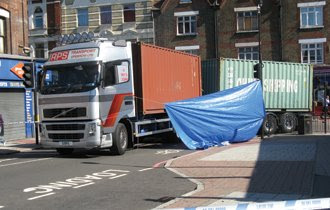 More information about the crash the aftermath of which was witnessed by a Londonist blogger, which I posted about yesterday:

A FEMALE cyclist was left battling for her life after her bike was crushed under the wheels of a lorry in Peckham, during Tuesday morning's rush hour.

The collision, which happened as the concertina lorry turned left from Bellenden Road to Peckham High Street, brought Peckham to a four-hour standstill, as ambulance crews had fought to cut the woman, thought to be in her late-20s, to safety.

A lorry driver has been arrested on suspicion of dangerous driving.
Posted by freewheeler at 08:07