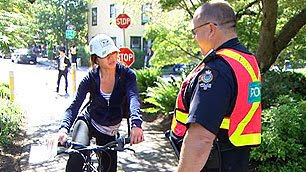 The most hostile country in the world for cyclists, from the point of view of car supremacist policing and ludicrous legislation, seems to be Canada.

Here, an overweight Vancouver cop pounces on a cyclist, presumably for not wearing a cycle helmet.

The fines range from $29 under the Motor Vehicle Act for not wearing a helmet to $109 for most of the other operational offences. Cyclists who fail to stop at a stop sign, run a red light or fail to yield to pedestrians will be fined $167.

If a police officer concludes that a cyclist rides a bicycle "without due care," the cyclist will get a ticket with a $195 fine.

Lorraine Chisholm, a frequent cyclist on the bikeway, said she's not thrilled about the police information campaign. "I just find it quite astonishing that they would be giving people warnings around this particular stop sign when that stop sign shouldn't be there. It's on a bike route," she said.

Lisa Slakov with the Vancouver Area Cycling Coalition said she's stunned the police campaign is happening in June, which is bike month in the city and some other parts of the province. She said police instead should target the cyclists' worst enemy — bad car drivers. "I know so many people who do not bicycle because they simply consider it really unsafe on the streets in the city," Slakov said.
Posted by freewheeler at 15:03